How to visit Cape Leeuwin in Western Australia

Cape Leeuwin is the most south-westerly point in Australia and encompasses an area with land formations and coastal limestone that are over 1 million years old. Cape Leeuwin also marks the point where the Indian Ocean and the Southern Ocean meet, with different currents, waves and swells patterns visible in the waters. From September to December the mild currents of Flinders Bay and the islands off Cape Leeuwin host the humpback whales during their migrating cycle. 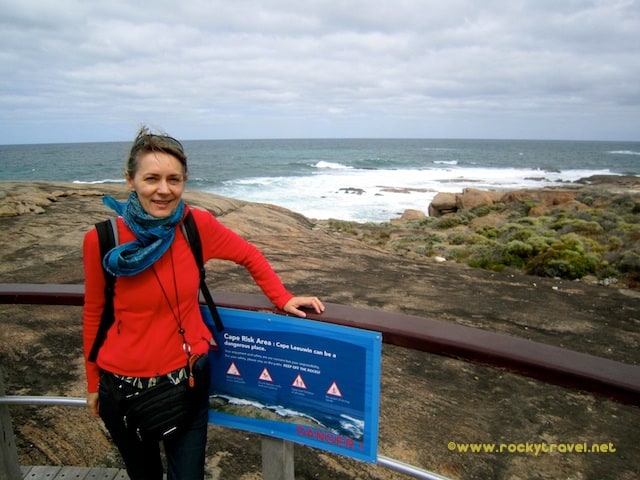 On my discovery tour of the South West Coast, I explored this area on a self-drive from Margaret River. Cape Leeuwin lighthouse was built by the Dutch who discovered the Leeuwin Land abord of the Leeuwin Vessel in 1627.

Later on, Matthew Flinders gave the name of Cape Leeuwin to the most south-westerly point of the island. The Cape Leeuwin Lighthouse precinct is a historic landmark which was included in the heritage lists of Australia as an acknowledgement of the importance of the lighthouse in the early development of Western Australia.

After visiting the Cape Leeuwin Lighthouse take a walk of the precinct area to see the remains of the Historic Water Wheel. This was built in 1895 for the lighthouse builders first and then to the lighthouse keepers’ cottages. What you can see now is an encrusted wheel with calcified lime.

To protect the Historic WaterWheel from further erosion it’s not allowed to walk on it but playing children cannot resist from climbing it.

The Cape Leeuwin Precinct area is absolutely beautiful. You will walk through rock formations and colourful granite boulders among grassy fields.

From the top of a massive granite boulder, you can enjoy a stunning view of the dynamic ocean and take photos of the lighthouse from afar.

On the way back it’s worth stopping along the Leeuwin Road for a walk on the beach. The whole area is pristine and the beaches are isolated. Long stretches of white sand, the far horizon and the ocean, the ideal place to take photos and enjoy the peacefulness of this pristine natural area.

here you find more information about the Cape to Cape Track in South Western Australia.

Cape to Cape Track from Cape Leeuwin to Cape Naturaliste

If you love walking in Cape Leeuwin you can start a section of the Cape to Cape Track, a spectacular 135 km walk trail that extends through the Leeuwin-Naturaliste National Park. This is really worth doing this if you can plan at least a couple of days. You can walk cliff tops, meander through rugged headlands, soft sandy beaches and wildflowers fields.

More interesting places and things to do in South West Australia

Why visit the Geographe Bay

Amazing Albany and its surrounds

8 day-trips that can’t be missed when in Perth

Why you will love Kings Park in Perth

15 Things to do in Perth for the Solo Traveller