Highlights from one year Travelling Alone in Australia

A few days ago I took a moment to answer some questions for an interview. While browsing through photos and memories of my first solo travels in Australia, I realised that 11 years have gone by. And by doing the math, it totals nearly 18 months spent travelling alone in Australia! From September 2014 up to now, I have been travelling alone in Australia for 7,5 months! It put a big smile on my face. As you may already know, I am not a resident of Australia. I am an EU-citizen, which means, I can only travel within the country with an Australia travel visa.

Looking back to my solo backpacking trips in Australia, (on a gap-year), I would have never thought that I was going to fall in love with Australia. Eleven years after that fantastic solo trip, I still am very much in love with this fascinating country that I call my second home. 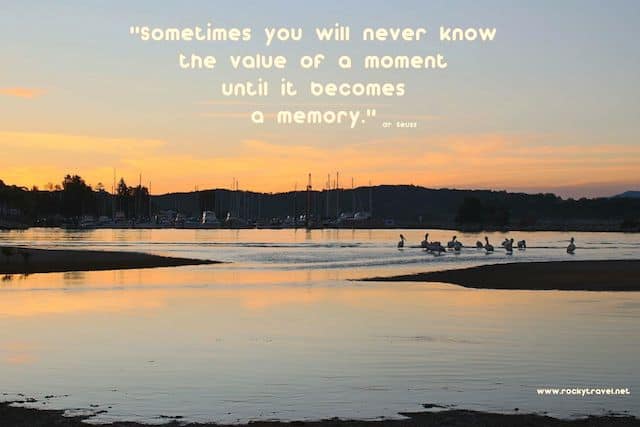 A recap of 11 years of travelling alone in Australia

It’s hard to believe it. After the initial difficulties and the many mishaps, I went through, and I am very proud of what I have achieved over time. Rocky Travel has received various accolades and awards, making it to one of the leading Australian Travel Blogs and number one Travel blog for women travelling alone in Australia.

It wouldn’t have been possible without the support of thousands of readers that are following Rocky Travel blog every day and the constant support of travel businesses and tourism boards that have believed in the quality and integrity of Rocky Travel as a valuable resource for independent-minded, solo travellers and travel brands alike.

To celebrate the 5th Anniversary of Rocky Travel, I am thanking you warmheartedly with this wrap up of the last year spent travelling alone in Australia!

In May 2014 I turned 50 and had a reason to travel solo to Paris. In September 2014 I started my 5th Solo Trip in Australia and spent nine weeks exploring new corners from Northern Australia down South to Melbourne and crossing over to Western Australia.

A small Jucy campervan took me through lush tropical forests to the colourful wetlands. I was keen to experience solo camping and camped alone for three days in Cape Tribulation and three days in the Atherton Tablelands.

I then explored the Great Barrier Reef and Low Isles on an eco-snorkelling sailing tour.

I also challenged my fear-of-heights with a Jungle-Surfing Adventure in the Daintree Rainforest and went on the four-wheel-drive adventure to Cooktown.

2014 marked my first experience housesitting in Australia. After reading a lot about it, I was keen to try out house-sitting in Australia, and it did work well for me. I got my first house-sit gig for one week in Mona Vale, Sydney and looked for a beautiful home with a pool and a lovely cat.

I love travelling on my own on in my 50s, but it’s only in 2011 that I started driving alone and getting familiar with the Australian roads. Since then, I have covered over seven thousand km and counting. From the Eastern to the Western Coast, on the GOR, on Kangaroo Island, to the Red Centre, to Tropical Queensland. I love setting off alone and explore the country by car. So far I have been travelling on sealed roads with short detours on dirt roads. The next challenge is to take it to the next level and go on four-wheel-driving adventures in the Australian Outback!

Three-day Jervis Bay Solo Road Trip How to get there and explore the natural beauty of Jervis Bay on the South East Coast of Australia.

If driving alone around Australia is something for you, check out these amazing Australia Road Trips of Australia.

Crossing Australia aboard the Indian Pacific

I love train travel. Being Australia a BIG country train travel is a very relaxed way of covering long distances and see places that you wouldn’t be able to see otherwise. Train travel is not only about the destination; it’s very much about the rail journey itself and all that you experience on the train. After the Ghan train crossing the country from south to north and vice-versa, it was time for me to experience something new.

Learn more about my experience on the Indian Pacific Train from Adelaide to Perth.

The idea of going alone in Australia long term was scaring me. The high cost of travelling around Australia is not something you can underestimate. It needs an accurate, sustainable travel plan to make it work. While there are various ways to save money and make long-term travels possible, you need to evaluate them and find the ones that work well for you. I am very proud I managed to find a way that allowed me to spend five months travelling and blogging around Australia.

Meeting and spending time with friends

As a solo traveller, it’s easy to meet strangers and make new friends. Every time I return from a solo trip I have gained new friends. It is the best part of my solo travels in Australia. This year it worked out fantastic! I could spend time and stay with lovely friends that I met over the years while travelling alone in Australia.

I have been discovering more of one of my favourite Australian Cities: I walked the Melbourne Laneways, learnt more about Melbourne coffee and food culture and went on a hot-air-balloon ride over Melbourne beautiful surroundings.

Driving around Australia along the South East Coast of Australia

In May 2015 I set off on a road trip through the South East Coast Australia. I had done this route many years before by bus. I love the South East coast of Australia, it is less busy than the north shore from Sydney to Brisbane, and in my opinion, there are extraordinary places in this part of Australia.

Vivid Sydney Light festival had been on my list for over three years so that I was happy to make it in June this year. It is one of the most exciting Australian festivals I have been to in Oz.

An Outback Adventure in the Kimberley in North Western Australia

In August this year, a dream came true. After exploring the Eastern Kimberley 4 years ago, I finally could tick the Western Kimberley Australia off my list and traverse the ancient Outback land from Broome to Kununurra. Read about my Kimberley Adventure Tour here.

2015 was a lucky year! I have been experiencing more Housesitting in Perth and its surroundings. It is very much the hit of my travels. While I saved money on accommodation, I could enjoy the freedom of living alone in a comfortable modern house with the company of lovely pets. On this post, you can learn from my house sitting experience in Australia and how to housesit as a solo traveller.

It is a short recap of 7,5 months of travelling alone in Australia. I returned a couple of weeks from Australia and to tell you the truth I am already missing it and can’t wait to set off on my next solo adventure!

Your Australia Itinerary made simple
Want to create the perfect itinerary for your trip to Australia? Get my book