5 Reasons Why You Will Love Touring Ireland

If you plan to travel to Europe alone in the coming months but are uncertain where to go, as an overseas traveller, I would add Ireland to your Europe itinerary.

Ireland every year makes it to the top destinations of many publications and travel magazines, as one of the most magical countries worth visiting, on the old continent, offering a great mix of things to do.

From dramatic natural landmarks to the rich history that goes back to 3000 BC, to the colourful Irish culture, Ireland for sure is a destination that will create long-lasting memories in your travels.

Being a comfortable and safe country to explore, it’s ideal for the adventurous solo traveller, that loves road-tripping, nonetheless going on a tour can be a great idea too for a first-time visit to Ireland.

CIE Tours have been leading tours of Ireland for 85 years, can create custom tours and also help you organise a self-guided tour if you prefer to go independently.

A trip to Ireland has been long on my bucket list, and hopefully, I will make it happen soon. For now, I can give you a taste of the best places to visit in Ireland, for first-time visitors, and what I believe are the main reasons for touring Ireland.

With ist 2,500 km the Wild Atlantic Way is the longest scenic coastal route in the world. There is nothing like walking to the “Sliabh Liag” or Slieve League cliffs, drinking in the terrific views over the Atlantic ocean, knowing that there is nothing between the sea and the next land is Northern America. This site was also known to be a Christian Pilgrimage for over 1000 years. 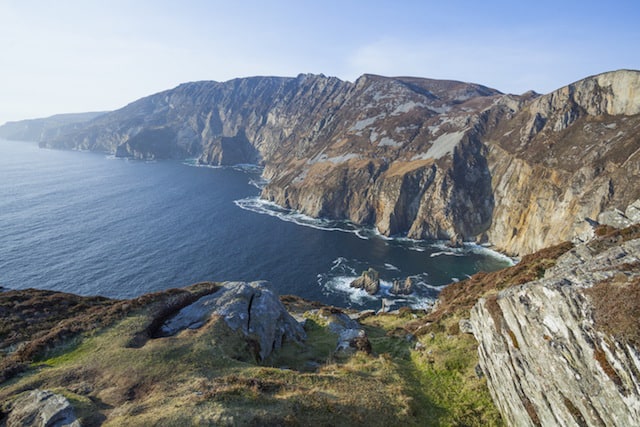 If you love nature, Ireland has some excellent places with the varied wild coastline. From surfer and sandy beaches, like in Kerry, to the ancient and rugged coast of the north, to breath-taking cliffs.

The Cliffs of Moher, stretching for 8km on the West Coast of Ireland, about 2 hours drive from Galway, is a top attraction first-time travellers visiting Ireland.

The Giant’s Casuaway is a Unesco World Heritage site as it is of the most ancient places in the world. Its impressive 40 thousand basalt columns are estimated to be 60 million years old as the result of a volcanic eruption. You can wander through unique rock formations towering the bays for hours. This is probably one of the top places in the world for photography and bird-watching lovers.

Furthermore, you can also learn about one of the many Irish myths, that one from Finn MacCool, who is believed to have started chucking boulders into the sea and building a bridge out to Scotland.

Learning about the Magical Regions of Ireland

There are endless tiny bays, little villages and picturesque regions that you can explore along the Wild Atlantic Way. One area that stands out for its beauty, peace and the magic is Connemara. Sandy beaches and quirky places like Derrigimlagh Bog, a wild and mysterious place, a mosaic of lakes and peat, are just a few of the Connemara landmarks. You can also witness the remnants of the first transatlantic radio station built by Marconi Company.

Ireland has a wealth of ancient sites that makes history so rich and varied. From prehistoric Ireland to the early Christian era, to the Viking and Norman invasions to the Celtic era, every site in Ireland bear much historical significance, and every place is deeply rooted in its history. Here are just a few places among the many worths visiting when planning a trip to the best ancient sites of Ireland.

Skelling Michael, a 6th Century Christian Monastery, featuring stone beehive huts, located 160 mt above the sea level is the oldest ancient site in Ireland off South West Coast of Ireland on the Iveragh Peninsula. It’s more popular after the name of the Ring of Kerry, a circular loop of 179 km that encompasses picturesque villages, towns and lakes. A must-visit coastal route for keen road tripper.

Glendalough is another monastic site with churches and a tower in a mountain landscape that also offers beautiful walks to the nearby lakes.

Ireland has many prehistoric stone circles too. The most popular free site is Dromberg Circle in County Cork with 17 stones and a few huts to visit. Another one is Beltany Stone Circle, which dates back to 1400-800 BC if you visit Donegal.

Stay in a castle in Ireland

Another excellent reason for visiting Ireland is its unique and heritage castles scattered throughout the country. From state towers to old ruins, to nobility homes, there are many impressive castles in Ireland. And many are now hotels too, where you can stay overnight.

One Irish Castle worth mentioning is the Trim Castle, the largest Norman castle, built in late 12th century by the Normans which was also used, in recent times, as a filming location by Mel Gibson. Today is open to the public for visits and is one of the best castles to stay in Ireland.

Irish are legendary friendly folks, and they know how to have fun! You will be able to meet the friendly locals by visiting the picturesque towns like Galway, Kilkenny and many more. Pubs are the place where you can reach the locals, dance with Irish music, either fiddles or guitars, and listen to the many “Craic storytelling“. The word craic is used in many contexts, but if finally defines fun and entertainment in Irish.

Planning a trip to Ireland

No matter what you want to do, the best time for touring Ireland is probably Spring and Summer when the weather is warmer, and the mild temps allow to explore the outdoors and enjoy the natural beauty.

Springtime is probably the best to avoid the crowds in summer. If you love flowers from March to May fields, get covered by all shades of yellow, pink, blue and purple. Make sure you plan well ahead and choose the best-suited way for visiting the country, either going alone or on guided tours of Ireland.