How Solo Travel in New Zealand helped me become a survivor

This is a Guest Post by Brittany Quaglieri. I’m a solo female traveler from the United States. I recently returned from spending three months in New Zealand. At 34 years old, this was my first long-term, solo trip abroad. It was a long time coming, though. To successfully make the trip, I had some hurdles to clear.

You see, I have depression and anxiety, symptoms of Post Traumatic Stress Disorder. For almost a decade, I have been working on improving my mental health. I have tried all sorts of things that work for other people battling depression and anxiety. Unfortunately, medication wasn’t what I expected, nor was counseling. Weekly yoga, much like everything else in my life, felt like a chore. It seemed like nothing would help me heal from my trauma. 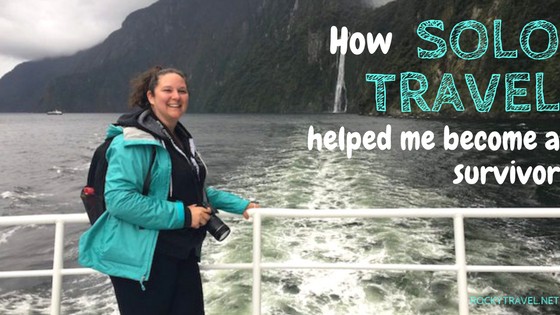 Then I went on a little adventure.

How my solo travel adventure started

I thought being with family was the right answer. So, I reached out to them and decided to move back to my hometown. I was living in Northern California at the time but come from a small coastal town in Massachusetts.

I sold my car and most of the stuff I collected over the years. Then shipped what I wanted to keep and made the 3,000 mile move with only a small suitcase in tow. I traveled by plane from San Francisco to Boston, with a couple of pit stops to see friends.

It was during this move across the U.S. when I realized how freeing and healing travel can be. For the first time in years I felt genuine excitement about something. It was invigorating.

For about three weeks I was on the move, visiting new places and revisiting some old ones. The old places changed so much that they seemed new to me. Curiosity about places and a drive to see them had finally come back to me after hiding in the shadows for so long.

My anxiety and depression prevented me from traveling for years, even in my own country. After feeling the way I did while making the trek home, I decided to make travel a priority in my new life on the east coast.

I promised myself I would travel somewhere new once a month. I started off small, exploring towns nearby and then across the state. Aside from a few work trips, most of the traveling I did was on my own. Even while visiting friends, I would explore their towns by myself while they were at work.

Soon enough, I felt comfortable taking an overnight train from Boston to New Orleans. I was a little (okay, a lot!) apprehensive about sleeping on the train. Not knowing where I’m sleeping, or who will be around me while I’m sleeping, is a big fear of mine. Private sleeper cars were way out of my budget, though.

My determination to A) ride an overnight train (a bucket list item), and B) face my fears, persevered and I made the trip. Pushing myself this one time gave me the confidence I needed to jump the next hurdle. Going abroad.

As soon as I returned from my trip to New Orleans I started thinking about going abroad. It had been nine years since I left the United States. It was about time I did it again.

I wanted to travel solo, I knew that much, but I also knew I was not yet ready to go on a full-blown independent adventure. To my advantage, a friend was living and working in Belize at the time. So, I made plans to visit her.

She lived in Punta Gorda, a remote and rural town in southern Belize. To save money on transportation, I flew into Cancun, Mexico using frequent flyer miles to get the flight for free. Then I traveled by bus and domestic flights from there.

Traveling this way was a great challenge for me.

How to deal with Anxiety when Travelling

My anxiety used to force me to need every detail of a trip planned out with perfection. For example, I needed bus or plane tickets and accommodation booked well in advance. I wanted to know exact departure and arrival times, as well as alternative times in case one was missed. I felt more comfortable knowing what the bus stations looked like so I would search for photos. I would even find each building I was planning to be in on a map so I knew precisely where I was.

These and many other thoughts ran through my mind while planning this trip. On this trip, I learned that these demands are excessive. I needed to loosen up a bit. That’s exactly why I was taking this trip in the first place!

Taking time to reflect on my progress.

Visiting a friend while navigating my way through two countries was a good combination of solo travel and having a travel companion. But I planned to challenge myself even further. On my way home, I spent two days alone in Playa Del Carmen, Mexico.

I chose Playa Del Carmen because it is touristy, so I’d get by without needing to speak Spanish. It’s close to the Cancun airport where I would be flying home from. I even splurged on a hotel close to the beach, the main drag of the town, and the bus station to make it easy to get around. Plus, it doesn’t have the college spring break reputation that Cancun has.

I didn’t want to party. I wanted to be somewhere that I could relax and reflect on my first time abroad in nearly a decade. The whole trip was another much-needed confidence booster.

Now all I want to do is travel abroad

I need more than only a week or two at a time, though. What I wanted was to live somewhere across the globe. For a month, two months, or longer if it worked out.

There were some hangups, though. Money, and having enough of it, is another fear of mine. I felt stuck because I have student loans to pay. If I wanted to do this, I needed to figure out a way to earn money while living abroad.

For years, I dreamed of living in South Korea as an English teacher, but was unsure if teaching was what I wanted to do. Plus, many programs need a commitment of at least a year. That’s a big promise to make for something (and somewhere) I might not enjoy.

A working holiday was what I needed.

But I was well into my 30’s and aged out of all the working holiday programs. Or so I thought. Two months after returning from Belize and Mexico, I found the solution to my dilemma. I learned about a New Zealand Working Holiday Visa for Americans over 30 years old. It ticked all the boxes, so I went for it.

It allowed me to live in New Zealand for up to a year. I could also work to make enough money to pay my student loan. The types of jobs I could work wasn’t limited, like it would be in South Korea. I could get a professional position if I wanted or stick to seasonal, temporary jobs. It’s a bonus that the exchange rate was in my favor, as well, gaining 40 cents on every U.S dollar.

I’m back in the U.S but only for the time being.

So, as I mentioned about 1000 words ago, I am back in the United States after spending three months in New Zealand. I intended to be there for the full year that the visa allows, but it didn’t work out. The job market was more competitive than I anticipated and I ran through most of my savings.

I’m happy with the time I spent in New Zealand, though. I confronted my demons and what I went through will stay with me forever.

Three months is a very long time to be traveling solo on the other side of the world. Especially when it was only a few years ago that getting out of bed each morning was a challenge. Admitting – to myself and others – that I was depressed and scared was a challenge.

Growth comes from facing your fears. Owning up and committing to improving your faults transforms you. I’m no longer a victim of my trauma. My time in New Zealand helped me become a survivor.

About this Author: Brittany Quaglieri is a solo female traveler and mental health advocate from the United States. Her blog, Wellness meets Wanderlust, focuses on travel and mental health and wellness, and how the two overlap to create personal growth and transformation. When she is not traveling, she’s enjoying a laid back Cape Cod life full of beautiful beach sunsets.