An adventure from Prague to Dresden along the Elbe cycle route

I’m Mike, and I’m a solo traveller from England. I use lots of different ways to get around, but my vehicle of choice is the bike. Specifically I like long bike rides.

Having the time to go on a long bike ride is a beautiful thing. And it’s something that I was recently lucky enough to do. My ride was a day trip from Prague to Dresden, and it took me along the Elbe cycle route.

The ride I went on was only a day in duration, but was a long distance – 115 miles (183km). Going down the Elbe cycle route was excellent as it’s signposted almost the whole way.

Signposts are useful as I’m forever getting lost. I’m certain that people with a “good sense of direction” are guessing or sneaking peaks at their phones GPS!

Not knowing my North from South aside, here is the tale of my jolly down the river. 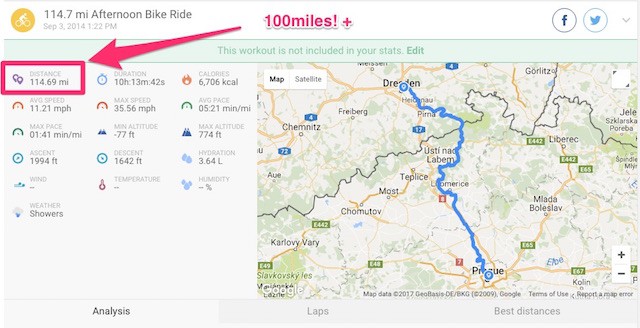 A day Trip from Prague to Dresden: Getting up at 6 am

Rise and shine. I enjoy waking up early it’s the only time of day I can think. People are often impressed when they hear how much I’ve achieved before 9 am. (they’d be less impressed if I told them how much I’d done for the rest of the day).

Today was a different to usual as I had a proper reason to be up at this time. I had a plan to cycle over 100 miles (160 km). Cycling 100+ miles (+160 km) is something that I had never done before and I was under-prepared. I was staying at a hostel in Prague and word of my trip had spread. Many people were interested in my bike trip, which led to too many Czech beers and a 2 am finish…

4 hrs after going to bed I sat in the same kitchen chair as the night before. The sun was coming up as I sat surrounded by the bottles of last night’s antics. It was quite a different scene to the one a few hours prior. As I looked around the room I spotted my friend who was joining me for the trip. No, not another scraggly traveller, my bike!

I had picked up the bike at a bicycle recycle centre in Italy. I loved it but it had learned a few annoying habits during its life. Habits like a constant pannier creak and rearing to the left at speed. These were things I was unable to change no matter how much I tried.

So with a wonky bike and sleep deprived I set off on my adventure.

Setting off on my bike ride: 7 am

My sense of direction enabled me to get lost trying to leave Prague. Impressive as I even had GPS to follow. Nevertheless, I got to where I needed to be in the end – and that was right by the river.

There are two reasons why I love touring along rivers. One, they’re easy to navigate. And two, they’re downhill (if you’re going in the right direction). Lucky for me the gradient was in my favour, so all I had to do was pedal.

The route I chose to follow turned into a dirt track. The weather leading up to my ride wasn’t great, and I only had slick road tires on my bike. The path turns to a single track of mud just centimeters away from the flowing river. It became too dangerous for me to ride any longer. So I pushed my bike through the sludge while watching I didn’t slip into the water.

The hostel staff told me I’d never make it in a day. I was starting to believe them…

As I finished dragging my bike, I looked back and I was sure I’d taken the wrong route. In the chaos, I also managed to get myself a puncture.

I repaired it quickly and looked at the time. Cycling over 100 miles is around 10 hrs in the saddle and I was running behind schedule. So once I was out the sludge I put my head down and got to work.

Around this distance of cycling I find something magical happens. I find myself slipping into a zen-like trance, so I match the pedal stroke with my breathing and let my mind wonder. I often find hours have passed by without me realising it. I’m not sure what this feeling is called: a kind of meditation? Either way, I like it!

I realise I’m the hungriest I’ve ever been. I was too hungover in the morning to eat, and the river delay meant I’d forgotten to eat lunch. It was 3pm, and I’d not eaten all day.

I had no time to stop for lunch if I was to make it to Dresden before dark. Stopping off would mean I’d have to spend the night in my hammock. I don’t mind hammocks at all. In fact, I wrote about the best ones here. It’s just that a bed sounded much nicer at this stage. I decided to stock up on chocolate and eat on the go.

The map promised my journey was 100 miles but my hostel was nowhere to be seen. Light was fading faster than my enthusiasm. Feeling wobbly I wished for nothing more than to stop. Motivated by the thought of a restless sleep I continued.

I entered Dresden and began to see stuff like the picture below. I wasn’t sure if the sun had got to me or parking meters really were painted like robots…

Regardless of this I pulled up outside my house for the night exhausted. With salt stains on my shirt I bumbled through the hostel door. I’d done it!

I was shaking like a leaf, but I’d cycled from Prague to Dresden in one day. All that was left to do was explore Dresden. I had a few days to recover from my adventure and then it was on to Berlin.

What to do in Dresden

I hadn’t heard much about Dresden before cycling there. So it was a nice surprise to see that there was quite a bit to do. Something I highly recommend visiting is the Frauenkirche. It was reduced to rubble in the WWII bombing but then rebuilt afterward. Interestingly wherever possible original bricks of the church were used.

You can pay around 8 Euro to climb to the top of the Frauenkirche. However, I decided to see the same city view from the church tower which is near the Frauenkirche. It’s a little cheaper at around 2.50 Euro, and the view is just as good.

I also recommend seeing the Fuerstenzug. The Fuerstenzug is known as the largest porcelain artwork in the world. What’s equally impressive is that the city was completely bombed in the war. This means that everything in the mural is a complete reconstruction.

About this Guest Author:
Mike is currently cycling around SE Asia. When he is not weaving through traffic he is running his bike blog www.pinch-flat.com. You can follow him on his adventures on Twitter.

Where To Travel Alone In Europe In 2020