9 Reasons why You will Love Visiting Croatia

When speaking about Croatia a well-known saying “A picture is worth a thousand words” is really true! Croatia is a country of crystal clear sapphire waters, unlimited sun, lively ancient walled towns, miniature villages and Mediterranean food delights. If this sounds like a dream to you, here are 9 more reasons why you should spend your next summer holiday right there!

Croatia is one of Europe’s sunniest places. Climate is mild on the Adriatic coast and you can enjoy cool, rainy winters days and tropical hot summer days with infinite sun. Fun fact is that the island Hvar, a very popular destination of many (even world-famous celebrities), is the sunniest island in the Adriatic. It gets up to astounding 2843 hours of sun per year. That’s also why it’s known by its nickname “Sunny Hvar”.

Croatia is a homeland of more than 1200 islands, isles & reefs and nearly 2000 km long coastline. But enough with the big numbers, what you need to know is that all islands have very good connections and distances between islands are very short compared to some other islands in Europe. For example, the second largest historic town in Croatia called Split is only 45 minutes away from the charming island Brač if you decide to travel by ferry. These short distances make Croatia an excellent place for easy travel and superb for cruising, because you can visit a different place each day. 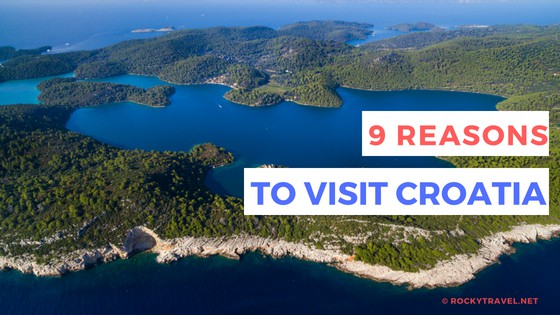 3. Good value for the money

Even though Croatia is a very popular tourist destination, in recent years you don’t have to fear big prices that will instantly make your head spin. If you are travelling on a budget, good news is that you can easily still find some good value. To put it into perspective, if you travel to Split and sit inside the trendiest lavish restaurants, then yes, the price will be higher but not unbearably high.

You can get an excellent dinner (drinks included) for less than € 50. You can have good value for food and for accommodation too if you book early. If hotels are not your cup of tea and your budget is more flexible there are popular cruise possibilities, and renting a boat might be your perfect choice for a summer holiday in Croatia.

Croatia coastline truly has a natural captivating beauty, but her exquisite famous medieval and ancient towns enriched by culture give her a distinctive final touch. You can visit the most stunning towns surrounded by crystal clear sea and high steep mountains that frame a city panoramic view in distance. Explore the atmospheric almost fully preserved remains of Roman ruins such as Diocletian’s Palace in Split that still fully lives today and was even used as Game of Thrones filming location.

Or famous city Dubrovnik and his old town ancient walls and extensive cultural heritage. Get lost among the ancient temples, an amphitheatre in Pula, narrow maze streets, columns and underground cellars. You’ll find many more of these hidden gems no matter which town you decide to visit. Unwind and experience a taste of easy-going life on the Medditerranean Sea.

Croatia is one the countries with the highest number of UNESCO Intangible Cultural Goods. But that’s not all. Croatia itself is a country known for its preserved nature and beauty. It has 11 nature parks, 8 spectacular national parks, and 2 nature reserves. Some of them are the Unesco-listed National Park & Waterfalls Krka, National Park Plitvice and others such as National Park Mljet, The Kornati islands National Park, etc.

6. The best beaches in the world

When you come to the beaches in Croatia you will smell fresh pine trees, salt sent in the air and hear the relaxing sounds of crickets chirping under the sun. Sea is extraordinary refreshing, completely safe and crystal clear with various shades of blue like some sort of hypnotizing magic that calls you to jump in and take a swim. There are many small pebble beaches around the coastline completely untouched.

Many of these secluded beaches are accessible only by the sea, and that’s how nature and appeal of some beaches can be preseved. One of the well-known and beloved beaches is Zlatni Rat on island Brač. Its unique shape and large size give that beautiful distinctive look and that is the reason why you see it on many travel brochures. If you like busy and cheerful atmosphere then this would be the perfect option for you.

In Croatia there are plenty of summer festivals, summer cinemas in the outdoors, and entertaining nightlife scene to explore while visiting towns and islands. Every year Croatia hosts many open-air cultural festivals, but also well-known international performers and DJs that gather crowds of thousands of people from all over the world. Each year a tiny but stunning hilltop village called Motovun hosts an annual international film festival on open air, with 70 films and organised after parties held within medieval walls. And truly there is many more of such events so you for sure won’t be bored.

Croatian cuisine is quite heterogeneous and has had many influences since every region of Croatia has its own distinguishing culinary traditions. So it’s safe to say you’ll find something you like. The roots of these culinary delights date back to ancient times. The coastal region offers delicious Mediterranean cuisine infused with homemade olive oil and herbs and spices that are being grown and produced on islands.

Croats are very keen on preserving their culinary tradition, that’s why you will often find even the restaurants that proudly cook from their old grandmas’ recipe book. You can expect nothing but fresh fish, fruits, vegetables in popular local markets where local agriculturist themselves sell their products at affordable prices. If you wanto to know where the food comes from, feel free to ask for more informantion and they will gladly give you some insights. There are many top-notch restaurants in cities that will make even the toughest critics speechless.

Apart from the historic towns, the Croatian coastline is full of many beautiful islands. Each of these islands holds its own secrets and delights that you shall explore and experience.

That’s reason why island hopping by a yacht is quite fun and popular way of exploring these islands and tiny traditional villages. Some beaches are not accessible from the road and secluded bays hide away the most stunning beaches in the world, so this is a nice way to experience it all. Life on islands is still very authentic, with traditional built homes from white stone that’s produced on island Brač, local people who are very friendly, open and easy-going. Beaches are clean and surrounded by beautiful calm sapphire sea. Aside of sheer natural beauty, food on islands comes with the best view.

All in all, Croatia is a country that must be on your summer holiday list.