How to stay clear of Dangerous Animals in Australia

I had heard so much about dangerous animals in Australia before venturing in my first trip to Australia and I must admit that most of the times the information was simply exaggerated.

Some people think of Australia like a place where venomous spiders and snakes are just everywhere, but in reality, the situation is far from that. In +14 years of solo travel adventures in Australia, I rarely saw spiders, snakes and crocs.

Unless you are out in the bush often and spend a lot of time in the wilderness, it is not common to get close to dangerous animals when travelling around Australia.

Although you are unlikely to make this kind of close encounters here you can click to learn about the list of the top 30 dangerous native animals of Australia.

Let’s have a closer look at the 3 main groups of dangerous animals. 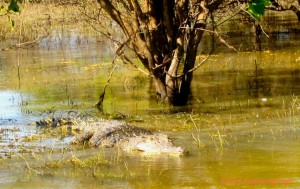 The most dangerous animals in Australia – the saltwater crocodiles

They are huge reptiles and can reach up to 7-meter length (23 feet) and their jaws can produce massive pressure. These animals are really dangerous. Unfortunately every year in Australia a crocodile kills a few persons.

Home of the saltwater crocodiles in North Australia, the Top End and the Tropical North Queensland. Here all areas are patrolled and monitored by park rangers, especially is they are visited by tourists. The wet season is the time when saltwater crocs are more active and therefore during these months all gorges and waterfalls are closed. In the dry season the official rangers first make sure no crocodiles are left in there.

No more crocs mean green light to open access to those gorges and waterfalls again!

These are basic tips when travelling Australia’s Top End and Tropical North Queensland to learn on how to stay clear of the most dangerous animals in Australia.

Snakes are very common in Australia and it is true, Australia is home to some of the most venomous spiders to be found in the world. But they are not as dangerous as you may think. Because of all the wrong and misleading information, it is very easy to get an exaggerated image of dangerous animals in Australia. Australian snakes are aggressive but they never stalk and attack you, unless provoked. Of course, if you tread on a snake, it will attack you and most likely bite you.

These are the basic rules and tips to avoid snake encounters in Australia.

Australian spiders are not deadly. There is only one spider which is considered to be deadly and this is the Sydney Funnel Web Spider, a large black web spiders to be found in the area of Syndey, in the 150 km radius area of the city.

However since an antivenom has been introduced in the early ’80, none has died of this spider bite. If you are bitten you should go to the doctor and if need it you will be treated with this antivenom. Some people do not even get any severe symptoms at all.

Another spider  is the Red Back Spiders which are to be found everywhere in the country, especially in warm urban regions. They look very similar to the venomous Black Widow Spider, with a distinctive red stripe on the back.

These spiders are venomous but most people do not react at all if they get bitten; the first aid you should get is an ice pack placed on the bite and see a doctor if the symptoms get worse and you get nausea and sweating, very few people develop these symptoms though.

I hope you find this checklist about the Australian dangerous animals will be useful when preparing for your trip.

Here below find more posts for your trip planning:

How to plan your trip to Australia

Driving Tips for Tourists in Australia

When is the best time of the year to visit Australia

How to plan your trip to Australia

The best way to organize your trip around Australia is self-drive. Camping is one of the best ways to fully soak in the amazing Australian landscape. However, is not for everyone and it requires time.