A day trip from Split to Krka National Park

Croatia and the Balkans are synonymous with natural beauty, even if you don’t know the violent, often arbitrary history of the region. You know of Dubrovnik and Sarajevo, and it’s likely you’ve seen pictures of Croatia’s Plitvice Lakes, one of the world’s most famous national parks. 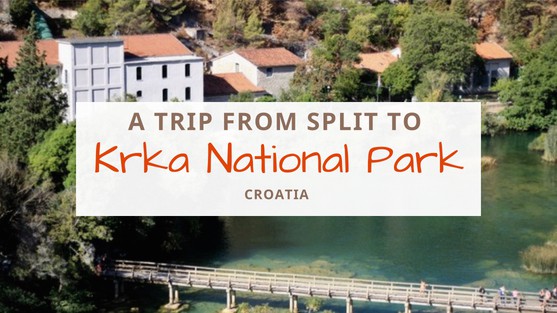 Where is the Krka National Park in Croatia

Located about an hour north of Diocletian’s Palace in Split is another Croatian park, less famous but equally stunning, known as Krka National Park. Stretching from the coastal town of Šibenik into the heart of Croatia’s mountains, often trying out to grab random bits of Croatian forest as it does, Krka National Park is less crowded than Plitvice Lakes and more conveniently located, making it an ideal day-trip from Split or, if you’re particularly keen on driving, Dubrovnik.

There’s ample parking (a rarity in Croatia), making it one of the least stressful places you’ll visit, though parking in Šibenik is less enjoyable if you plan on visiting the town and its UNESCO sites, plan on battling a lot of inner demons and road-rage. Krka’s main entrance is located just a few miles drive from the town, and it’s a pretty simple process to gain admission to the park. Ticket prices vary by season. Summer visitors (July – August) pay 200 kunas ($35.19), while those who visit outside of that pay substantially less.

If you do visit during the summer, plan on arriving early, as there are a limited number of tickets sold throughout the day to better manage the flow of tourists and retain the park’s pristine beauty. Upon paying, you’ll be ushered aboard a bus (you can choose to walk, but it’s hobbits-destroying-the-ring distance) and driven to the base of the mountain where the hiking trails begin.

You’ll also be upsold on a few Krka tours, but only take those if you’ve got plenty of time to spend in the park; the most interesting is a boat excursion to the island of Visovac, located at the centre of Krka (you’ll see it on the bus ride). The island includes the Visovac Monastery, which was founded by Franciscans in 1445 during the reign of Hungarian Louis I.

The main walking trail takes about an hour to hike if you don’t stop for anything, but there are lookout points scattered throughout, making that unlikely. Instead, embrace the Croatian knack for moseying and enjoy at least three to four hours exploring—the first significant lookout peers down on Skradinski Buk, a startlingly clear pool filled by a series of cascading waterfalls (at this lookout I also saw a cat hunting a snake, but I can’t promise that happens every day).

Hiking to the Krka Waterfalls

Follow the trail down, through patches of forest, some old abandoned buildings, and several more lookouts, and you’ll arrive at Skradinski buk’s base of the waterfalls. There are likely to be crowds of tourists there, but it’s large enough to find your patch of land and settle in. Plenty of people go swimming (myself included), and a litany of shops at the base means you can find food, clothes, and towels. If you didn’t plan well, you could also do like I and swam in your regular clothes, as the hike back up is arduous enough to either dry you completely or help you forget that you’re cold and wet.

From the base and the bridge across the pool, you’ll get a great view of the Jaruga Hydroelectric Plant, a marvel itself. Built-in 1895 at the height of the Austro-Hungarian empire, it is the second oldest power plant in the world, and you’ll find remnants of it scattered throughout the park. On the return hike, there’s a massive old turbine to touch (and you’re allowed to touch it, as opposed to sneaking touches of historical objects when no one is looking).

The return hike is gruelling and almost entirely made of stairs, but there are a few lookout points throughout it as well, meaning you can pace yourself and get different glimpses of the beautiful Krka waterfalls, including from directly beside and above it. After climbing most of the stairs, you’ll enter another shopping area with a few restaurants as well, making it a perfect place to grab lunch and enjoy the view. Then, more stairs that eventually deposit you at the entrance and the bus ride back to your car.

Most people visit Croatia for Plitvice Lakes and Dubrovnik, and I can hardly blame them, both are stunning locations you’ll remember to your last day. However, Krka is an excellent alternative to Plitvice Lakes, especially if you’re looking for day trips from Split or other parts of southern Croatia. There, you’ll have time to enjoy the serenity and natural beauty without battling hordes of tourists or obscenely long drives.

No matter where you go to Croatia, expect a welcoming populace, excellent olive oil, waterfalls and a great time.

Pin it for later

About this Guest Author:

Josh Skipworth is a freelance writer, first-generation passport holder, and recovering political hack. Check out his blog at Cartography & Cloture.

More posts about hiking in Europe

hut-to-hut hiking in the Dolomites